Becoming a Person of Significance with JT Foxx

“Don’t strive for success but rather choose to be a person of significance and value.”
― JT Foxx

Leading a life of significance requires substantial effort and great coaching. That is what JT Foxx organization has done for me.

I first met JT Foxx during his comeback tour in September, 2014 in Cape Town, South Africa. It was at a critical point of my life. I was looking for a genuine results coach to help me grow beyond my average ways. As a former amateur athlete, I knew coaching is everything. I wanted to go global with my business and I knew I could not do it on my own. I had needed a great coach like JT Foxx. He is the world’s number 1 wealth coach. 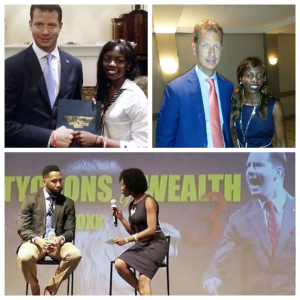 Previously, I had tried other global coaching organizations but I was not satisfied with their services. I was looking for a great coach who would commit to working with me and create my blue ocean. I was determined to do whatever is takes to transform my life and move away from a sea of commonness that was slowly killing my zest for life. I wanted to commit to a life of significance and purpose. At the same time, I had just been accepted into a two-year Masters of Science course at the University of Salford, Manchester, UK. All these changes in my life were happening so fast. I needed a coach to sharpen my skills and achieve results.

During his comeback tour, JT Foxx held a two-day coaching class in Cape Town and the room was fully packed with hundreds of people who were hungry for change and significance in their lives. The session started with Reggie Batts, JT Foxx’s business strategist and mindset coach whose voice thundered across the room as he opened up the session.

“Is this your year” he asked even louder.

Reggie is so authentic, a golden thread that runs within the JT Foxx organization. He talked about limiting beliefs, changing your mindset and how each one of us were going to be transformed if we implemented the principles JT Foxx taught us. He also emphasized on the importance of daily mind feeding on great material, and taking notes of ideas that flow all day long. I had my pen and a note book ready to take notes. I was determined not to miss out on anything. I was sitting at the edge of the seat listening attentively. It felt like my first lecture at the university. I took notes and highlighted what Reggie emphasized. It was powerful and transformational and I have results to show for it.

After Reggie’s session, we heard testimonies from a few of JT Foxx’s students from South Africa who had achieved so much success in less than one year of getting his coaching. They stood up on the stage and gave their testimonies. My heart began to beat so fast because I had made a connection with JT Foxx organization.
BOOM! I knew it right there I was at home. I had found my tribe.

Seth Godin in his book, Tribes, defines a tribe as any group of people, large or small, who are connected to one another, a leader, and an idea.
I knew the JT Foxx organization was going to my tribe. The Tribe of quick implementators. The tribe of results. The tribe of Millionaire Underdogs who are bound by the common golden thread of Family First.

What happened next? – Family First

When JT Foxx’s time to speak on stage came, there was a powerful introduction of him with photos of him alongside successful entrepreneurs such as Richard Branson, George Ross, Hugh Hilton. JT Foxx is one of the top platform speakers in the world and has been deemed the world’s number 1 wealth coach.

He spoke with so much authority, clarity and knowledge. He gave us a step-by-step process on how to build a business and get results, always pointing us to examples of how his students are successful. What moved me is despite all these successes and access to celebrities, he values his coaching students more than anything. He does not mind putting the limelight on his students and coaches and showcasing their successes.
His tagline is powered by your success and his students are family to him. We all wear a wrist band with the words, Family First.
He had a photo of his first group of Top1% South African students, all of whom are successful entrepreneurs today. He is very fond of all his students and shares their successes on the stage.

When JT offered us the opportunity to be coached by him. I jumped in and signed up for Top1% coaching. I received a one-on-one coaching program with a great coach, Kevin E. France. I also received monthly webinar coaching organized by Eric Easterwood, JT Foxx’s Vice President Global Coaching Operations with guest speakers who included Dr. Nido R. Qubein, JT Foxx’s coach.

“Success is the sum of all the choices you have made in life. Everything in life happens because you took action. If it hasn’t yet it’s because you didn’t take enough action.”
― JT Foxx

I started my coaching in September 2014 while in business school and having a full time job. I did not want to wait any longer. I saw what coaching did for others and I thought, if they can do it, so can I. JT Foxx’s coaching is far much more that any theories that learnt in business school. JT Foxx and his team of coaches gave me practical strategies that helped me manage my energy, prioritise and successfully manage my studies, job while setting up a business. My coach Kevin E. France guided me through the process during our coaching sessions. In 2015, while I was conducting research and writing my thesis, I had a chat with JT Foxx when he came to Cape Town for coaching. He asked me how I was doing and what my plans were. He encouraged me to complete my studies and give it my 110% effort. He told me he identifies with the long nights and early mornings because at that point he too was writing his book, The Millionaire Underdog and travelling globally for coaching and speaking events. Those words of encouragement and coaching tips saw me graduate in 2016 and received a distinction mark for my research thesis. Go to http://millionaireunderdog.com/ to know more about to get his book. I read it every week to get more insight and strategies for my business. 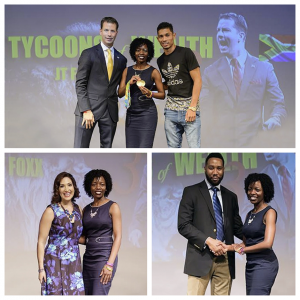 Fast forward today, JT Foxx’s coaching has transformed my mindset. I am a business development strategist, helping businesses translate ideas into a roadmap to success. Coaching is a lifetime commitment and not a once off event. I have continued to receive coaching from JT Foxx organization to ensure that I remain focused on adding value and significance to others through my business.

JT Foxx is one of the world’s top platform speaker and he coaches his students to follow in his footsteps. In February 2017, I attended the JT Foxx – Tycoons of Wealth 3 in Johannesburg, South Africa where I interviewed Ndaba Mandela (Nelson Mandela’s grandson) in front of over 1500 entrepreneurs from around the globe. Ndaba and I discussed ways in which we can create opportunities for young South Africans through entrepreneurship and coaching.
At this event, I also shared the stage with Randi Zuckerberg (Former Facebook Director of Marketing), Wayde Van Niekerk (South Africa’s 400M Olympics Champion and World record holder), JT Foxx and Damien Elston (JT Foxx’s CEO and business partner).

JT Foxx organization offers a platform for global partnership to all his coaching students. Two months ago, I attended a JT Foxx event in London where I built relationships with so many entrepreneurs. Most recently, I partnered with one of my UK based clients to launch a business. I also partnered with a Netherlands based entrepreneur who is an authority in automating business systems and processes.

Towards the end of this year, JT Foxx gave me the opportunity to share the stage with him again and interview a Hollywood celebrity. It took one person (JT Foxx) and one opportunity in September 05, 2014 to change the trajectory of my life. I love the person I have become. I wish to express my sincere gratitude to JT Foxx and his team of coaches for believing in me. You are more than coaches to me.

I am a Business Development Strategist at CAO Consulting. I help entrepreneurs at their start-up, scale-up or exit phases of their businesses implement tailored systems and processes that will minimize losses and maximize profits. With the correct business system in place my clients wow their customers, improve their brand credibility and grow their profit margins above their normal rate.

Do you want to grow your business successful with less hassle?